Skip to content
There came a point in my fishing where I could consistently catch fish.  My casting was pretty good, presentations were decent, and I was hooking up.  I enjoyed it and spent a lot of time on the water.  I learned a ton by slowing down and observing.  I started catching even more fish.  I started tying flies more often and started studying bugs out on the water.  My skills kept improving.  Now, instead of worrying about catching lots of fish, I wanted to catch a trophy fish.  So I started noticing when and where I caught the biggest fish, hoping that one day a trophy would come to hand.

It was a blistering cold day in February with snow flurries.  After catching a couple fish dead drifting a nymph, I knew it was time to change it up.  My fingers were numb, so I wasn’t about to change tippet, so I tied an articulated sculpin pattern on to my 4x (I would definitely recommend heavier tippet for a big articulated streamer).  We were fishing a big, deep, slow moving pool.  I let the sculpin sit at the bottom and gave it 6 inch twitches.  Not long after, I felt the distinctive grab of a fish.  I set the hook, and held on.  The fish I was roped in to wasn’t jumping around or running like crazy . . . he just bore down at the bottom of the pool and gave me violent head shakes.  My 5 wt. rod was bent in half.  Luckily, I kept my wits about me and fellow guide and trout bum Jace also helped coach me.  After a few minutes we got the guy to the net, which he filled entirely.  Staring up at me was a handsome male brown trout, taped at 23 inches and approx. 5 pounds.  My arm ached from the fight.

Since then, I’ve been lucky enough to land many big fish over 20 inches (known as the “hero” mark).  I’ve observed and recorded my successes over the years with a special focus on the big fish landed and have compiled the following tips for landing bigger trout from these experiences.  This will enable you to step up your game and take it to the next level. 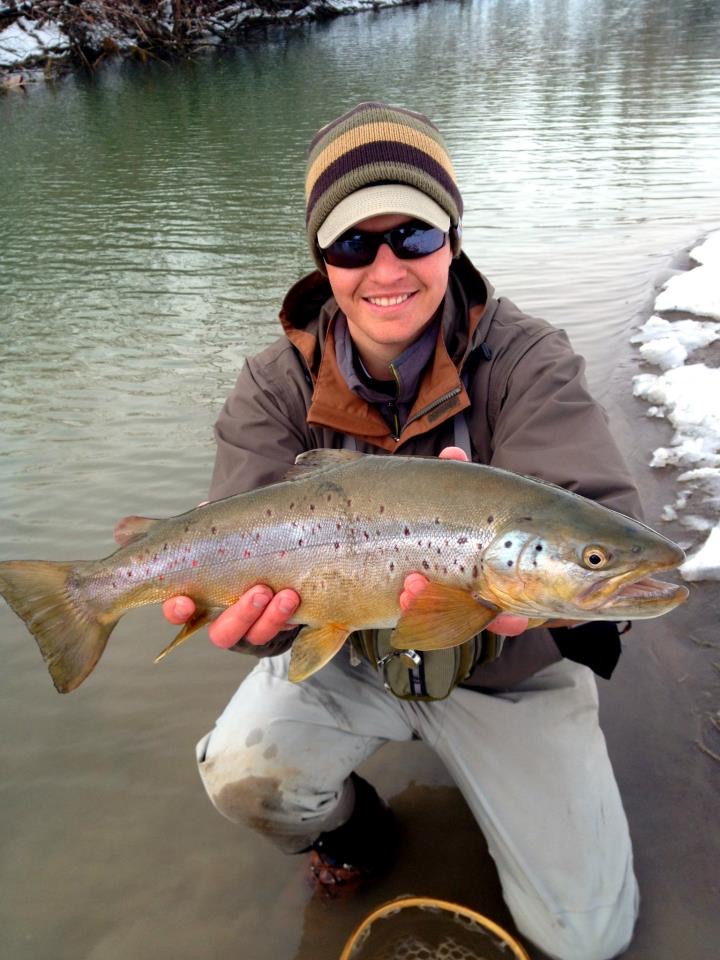 I’ve spooked some big fish because I was looking upstream at the next awesome pool and went trekking through unproductive looking water, only to see a big shadow of a fish dart out from behind a rock and disappear.

I’ve heard the debate.  Small flies will catch big fish too, I know this.  I understand.  I’ve personally caught big fish on small flies.  But hands down, ALL the BIGGEST fish I’ve ever seen landed have been on big streamers. These include a 23″ tiger trout, three brown trout 21″ or bigger from the same pool, a 24″ cutthroat, and a 24″ rainbow trout.  In my 16 years of fly fishing (5 years guiding) I’ve seem many more big fish caught on big streamers than small flies.

3.  Get off the beaten path

Pressured fish are much more picky and very unforgiving of mistakes.  If you’re not stealthy and/or don’t make a good presentation, it’s game over.  Finding less pressured water means more forgiving trout and increased chances for big fish that haven’t seen every fly in the book.

4.   The biggest fish hold in the the head of the runs, pools, and prime feeding lies

They’re the top dog, and push smaller fish behind them.  Again, I’ve seen this time and time again in my fly fishing.  I actually expect the fish to get bigger as I work my way up a run or pool.  Just the other week I caught 8 brown trout out of one pool.  I started by casting into the back end of the pool and caught 3-4 fish in the 10-12 inch range.  I started casting further up the pool and proceeded to catch a couple fish around 14 inches.  Closer to the head of the pool I caught a couple nice 16 inch specimens.  Finally, I cast into a fast seam tumbling over some rocks right before entering the head of the pool.  There I hooked and landed the biggest fish, an 18 inch brown trout with solid shoulders, deep colors, and a nice kype.  It was a very healthy male and a great fish for that particular stream.  The biggest fish will stake out the prime feeding lies, so target those.

Are there crawdads (crayfish, crawfish) in the water?  Then fish something to imitate those.  I guarantee the biggest fish will be eating them.  Are there sculpins in the stream?  Fish those.  Big articulated sculpins are my personal favorite to catch big fish.  Are there a lot of baitfish or minnows?  You better have some flies to imitate them.  Trout are predators and the big ones will attack these food sources with no degree of subtlety.

6.  Take Advantage of the spawn

Don’t fish the redds or walk over them!  We want the fish to reproduce successfully to sustain our fisheries, but during the spawn, trout are aggressive and defensive.  Take advantage by fishing every inch of water with big streamers.  If you haven’t enticed an eat within a few casts, keep moving.  I’ve found the fish strike out of aggression within the first cast or two during spawning season.  If you’re getting follows but no eats, switch up the retrieve, and then your fly if you’re still not getting strikes.

Again, I’ve caught big fish all throughout the day, but the most have been landed late in the evening.  By the time evening rolls around, the fish are getting hungry again, and the deepening shadows help camouflage and hide them from predators (this is true for early morning also). This is a great time for hatches as well.  The fish let down their guard a little and eat with more abandon.  Mistakes on your part will be more easily forgiven, offering you much better chances of hooking a large fish.  My father-in-law hooked a huge rainbow trout on a small dry fly at dusk a couple years ago on the Farmington River in CT.  It took him to his backing and took him 30 minutes to get it to his feet. Unfortunately, his net was too small.  As he was trying to get the trout’s head into the net, it flipped out and snapped his tippet.  He lunged for the fish but just got a face full of water.  The fish was gone.  It had been as long as his arm.  He called me immediately afterwards and we had a good cry.

It’s a numbers game.  The more fish you catch, the higher your chances of hooking your trophy fish.  Follow the above tips and spend more time on the water figuring it out, and you’ll hook into bigger fish.